Austin FC supporters are ready to pack the stands for the club's first home match on Saturday, June 19. (Q2 Stadium/Twitter)

After years of preparation and eight weeks on the road, Austin FC is finally home.

The club is geared up for its "second start" of the season as they play within the Q2 Stadium walls for the first time and face off against the San Jose Earthquakes at 8 p.m. on Saturday, June 19.

With all of the hype and eight weeks of information to catch up on, it's easy to feel overwhelmed by what to know as the club plays on Austin soil for the first time. Austonia's got you covered with an all-day gameday itinerary that touches on everything from parking to food at Q2 ahead of the long-awaited first match.

While 8 a.m. may seem like an excessively early start, there's no such thing as too early to be excited for the home opener in this made-up scenario.

First of all, if you're trying to watch the game live at Q2 Stadium, you'll have to scour the sites of ticket resellers like SeatGeek or VividSeats at up charged prices. Tickets sold out on the Austin FC site almost instantly when they dropped last month. (But don't worry, we have watch party info if you didn't snag tickets.)

If you have tickets, you'll want to keep three things in mind as you plan your day:

Now, it's time to find some pregame action at Austin FC watch parties around the city.

Austin FC has two main supporters' groups within the city: Austin Anthem, which is the longest-running club that hosted a 1,000+ member watch party for the club's season opener, and Los Verdes, a lively crew that features fan band La Murga de Austin.

Austin Anthem is hosting a watch party at their headquarters, Circle Brewing, which is located just down the street from Q2 Stadium at 2340 W Braker Ln. Starting at 11 a.m., the watch party comes with food trucks, live music and more for the whole family.

Meanwhile, Los Verdes will be at the neighboring Hopsquad Brewing for more food, music and the club's newest beer, Los Verdes Pale Ale.

Austin FC has also announced its official watch party at Plucker's Linc on 6406 North I-35 starting at 7 p.m. on matchday. The watch party will include food, drinks, prize giveaways and a live DJ as Austin welcomes their first home team. 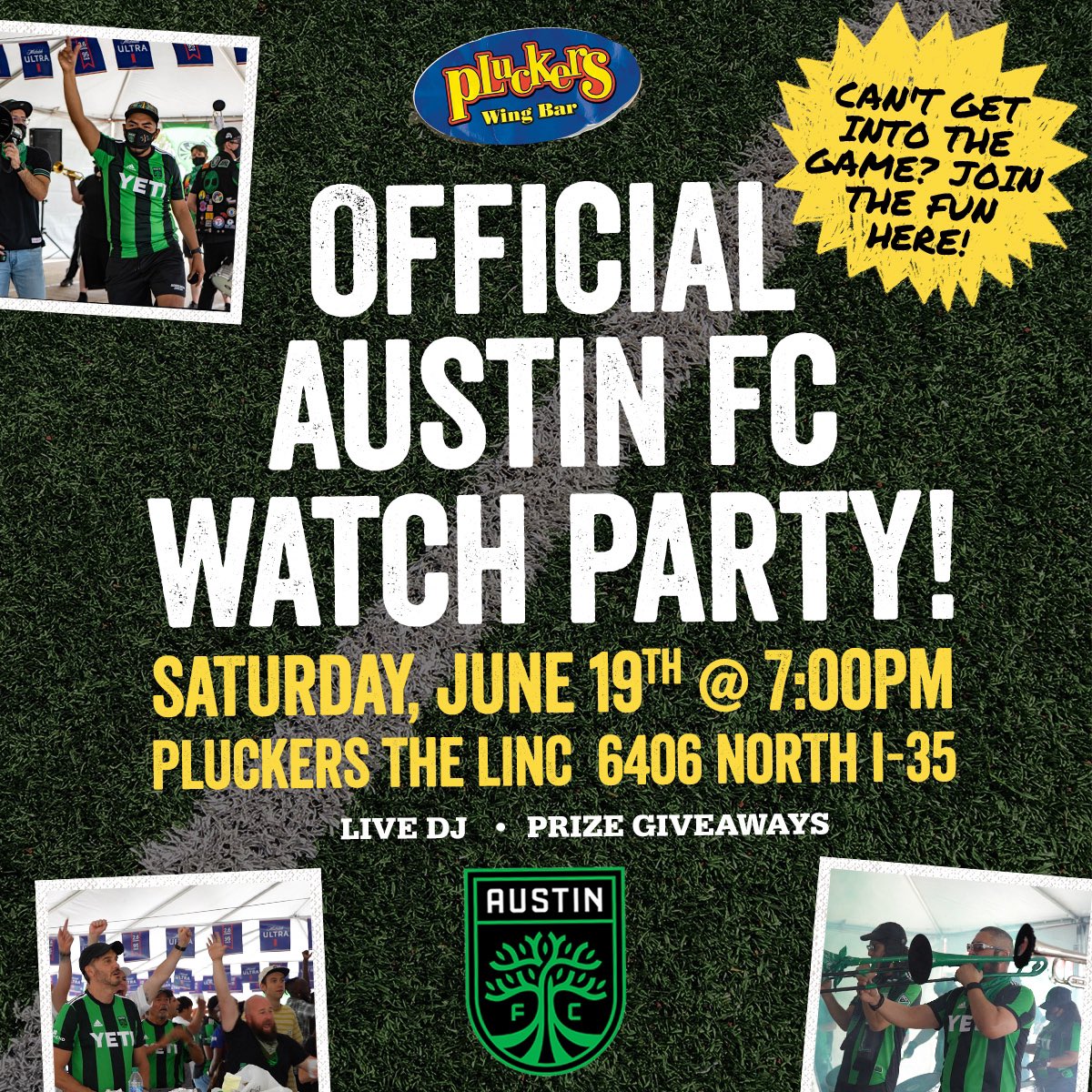 Three nearby breweries, including Circle Brewing, Hopsquad and Celis Brewing, are within half a mile of the stadium, so viewers will be able to hear the roar from Q2 as they host watch parties of their own.

For those looking to celebrate at your neighborhood bar across the city, check out Austin FC's 30+ member Pub Club. The club's pub partners have hosted smaller viewing parties for every match of their existence so far, and they should bring bigger crowds come home opener time.

Supporters' groups have already marched on Denver and Nashville, and they're doing the same in Austin just before the opening match. Four organizations- La Murga de Austin, Austin Anthem, Oak Army New Braunfels and Los Verdes- have teamed up on the march. Meet just across the street from Hopsquad and Circle Brewing, the two hubs for watch parties, before making your way to welcome the team bus along Calle Norte.

Austin FC offers on-site parking to season ticket holders, while other fans can use Cap Metro or offsite parking to get to the first home match. (Austin FC)

Cap Metro has already tested the waters for bringing Austin FC fans to and from matches after a season ticket watch party at Q2 last weekend, and they're geared up for more frequent services at their Kramer Lane stop about a half mile from the stadium.

You can access the bus via the four routes with increased frequency near the stadium or find a Park & Ride stop to get to Q2 without the hassle of parking. For more tips on using Cap Metro, click here, and visit here for a complete gameday schedule.

The club has also mapped out walking and biking routes and a drop-off point for those coming in via limousine or rideshare apps.

For those parking at Q2 Stadium, the club recommends making parking plans before getting to the site. Austin FC has laid out three lots for those with special access.

Season ticket holders get an automatic parking pass with their purchase, and all other ticket holders should visit Pavemint to purchase offsite parking prior to getting to Q2 Stadium. Austin Police and Traffic members will screen those with special access prior to entry.

7 p.m: You're in! Beer hall, food and in-stadium information

Austin FC's Verde Queso was a competition winner for a reason, and it'll be featured at the stadium's iconic Queso Fountain. (Claire Partain/Austonia)

Once at the stadium, hopefully you'll have time to take in the sights, sounds and smells before the match.

Here's a few things to expect, from local food to craft beers on tap:

8 p.m: What to know before the whistle blows

Insane @brad_stuver save you say?

WHAT ELSE IS NEW 😤 pic.twitter.com/yYxs0ZK8es

For those who haven't quite stayed up to date, here's a summary of the club's first eight weeks on the road as you prepare for some pre-match banter.

The club has racked up eight points in eight games toward their standings, putting them at ninth in Western Conference out of 13. That's not too shabby, according to Head Coach Josh Wolff, especially after a road stretch that saw multiple injuries and one and half games without Captain Alex Ring playing when he got a red card.

After a 2-0 loss to LAFC, Austin saw their breakout win against the Colorado Rapids with a 3-1 victory. It was midfielder Diego Fagundez who got in the first goal for the club, and he celebrated by throwing up an "LV" in honor of Los Verdes. Fagundez scored once again the following week against Minnesota and has solidified a starting spot in the midfield.

Cecilio Dominguez was the other breakout star in the Colorado match, scoring two goals back-to-back in a span of just 10 minutes to clinch the game. Dominguez is one of two Designated Players for the club, and he's recently been the striker at the front of Austin FC's lineup. Most recently, Dominguez broke a three-match scoring drought as he helped the club to a draw against Kansas City on June 12.

After beating Colorado, Austin FC went on to a 1-0 victory in Minnesota before crumbling in Kansas City and losing 2-1 to Wolff's former team. The club struggled to find its footing afterward and suffered several injuries, but they still scraped up a few draws to close out the grueling road stretch.

Now, Austin is upbeat from two draws against very good West Conference teams but has just 17 healthy players on its roster heading into the home opener.

Here's a projected starting lineup for the club: 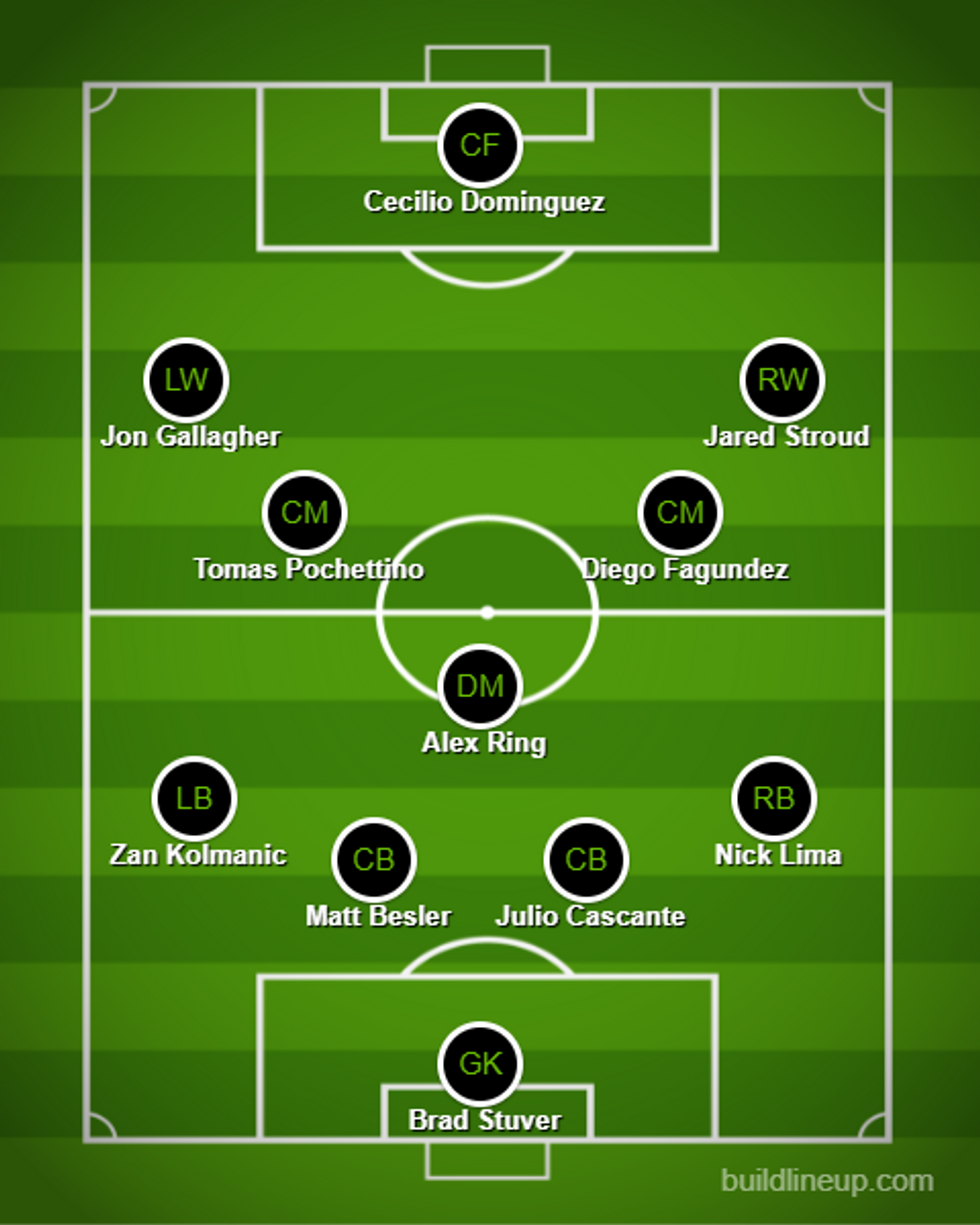 Other players to know include Captain Alex Ring, who leads the midfield, and goalkeeper Brad Stuver, who has wowed crowds with his highlight-worthy saves week after week.

We're just as excited as you are to see the city's first professional team come to Austin, and we'll keep you updated on all things Austin FC as the club warms up for their first home match. Stay tuned on Austonia's Austin FC page and @austonianews on Twitter for live updates for Saturday's match.