This story was originally published by ProPublica. Read it here in its original form on the ProPublica website.

On a summer day last year, a group of real estate tech executives gathered at a conference hall in Nashville to boast about one of their company’s signature products: software that uses a mysterious algorithm to help landlords push the highest possible rents on tenants.

“Never before have we seen these numbers,” said Jay Parsons, a vice president of RealPage, as conventiongoers wandered by. Apartment rents had recently shot up by as much as 14.5%, he said in a video touting the company’s services. Turning to his colleague, Parsons asked: What role had the software played?

“I think it’s driving it, quite honestly,” answered Andrew Bowen, another RealPage executive. “As a property manager, very few of us would be willing to actually raise rents double digits within a single month by doing it manually.”

With a 10% drop in three months, a new Realtor.com price study lists Austin as the metro with the biggest drop in real estate list prices since July.]

We're also high on the list of markets where sellers have cut the asking price after listing a property.

Despite the quick drop, that price is still higher than last September, by 2.2%.

The report calls Austin "the poster child for torrid housing market growth during the pandemic."

Other markets with big price drops include Phoenix, Denver, and
Las Vegas.

Click here to read the full report from Realtor.com.

Concept rendering of proposed mixed use development at 305 South Congress

When former First Lady Lady Bird Johnson created the Town Lake Beautification Committee in 1971, she hardly could have imagined the scale of the development that would one day take place along the banks of the waterway that would later be renamed for her.

Johnson’s vision for the lake began with a visit to London in 1971 alongside Ann Butler, the wife of then mayor Roy Butler. During a stroll along the Thames Path, a verdant trail in the heart of London, Johnson wondered whether they could create something like it in Austin.

Thus was born the idea for the 10-mile trail that today is named for the Butlers, as well as a pavilion and other amenities. The effort restored vegetation and breathed civic life into Austin’s south shore, which had been an unbuildable, deforested floodplain prior to the construction of Longhorn Dam in 1960. Johnson’s committee “raised funds to plant hundreds of trees along the banks of the lake and spent years beautifying the trail,” according to a 2011 resolution of the City Council. 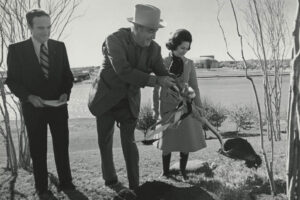 Today a stretch of that riverbank is at issue in a contested zoning case involving the developer Endeavor Real Estate Group, the Atlanta-based Cox Family—the billionaire owners of the property—and lobby firm Armbrust and Brown, which represents the owners and developer and is a major donor to Austin City Council candidates.

Endeavor is seeking permission from the city to build as many as six high-rises on an 18-acre site next to the Congress Avenue Bridge, featuring ground-floor retail, 1,378 condos or apartments, a 275-room hotel, and 1.5 million square feet of office space.

The plan has stoked the fury of environmental group Save Our Springs Alliance, which sees it as an encroachment on a vital waterway and a giveaway to the developer in the form of fee waivers, infrastructure subsidies, and exemptions from normal parkland requirements.

Click here to read the complete story on The Austin Bulldog.